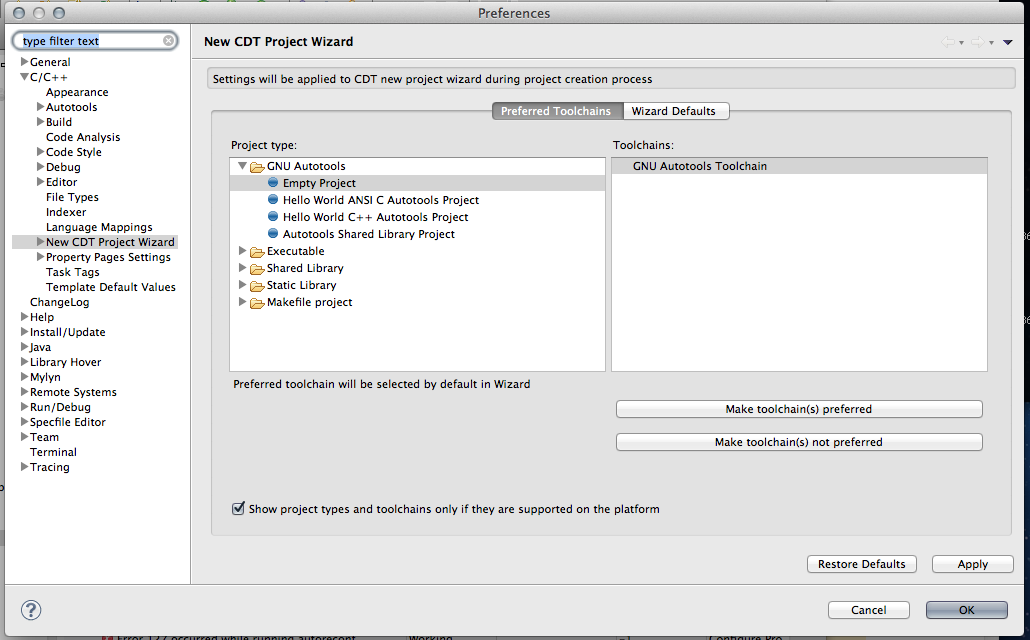 Cmake-eclipse-helper is a very simple plugin that helps you setting up CMake projects for eclipse. You can even use it to switch between different toolchains within the same project. It fully relies on the built-in CMake generator and only adds a little spice to it:. It adds a CMake context menu where you can switch between build types and toolchains. You can setup project templates, so.

This tutorial will guide you through the process of installing, updating, and initial configuration of CLion on macOS.

Before you start the CLion installation on macOS, make sure your machine meets the hardware requirements, and the version of your macOS is 10.9.4+.

You can always have multiple instances of CLion installed on the same OS, including both release and EAP builds.

Alternatively, you can install CLion via the Homebrew package manager: brew cask install clion. However, this option is unofficial, as the CLion team is not involved in its maintenance or support.

Toolbox is a control panel that allows you to manage all JetBrains developer tools, including CLion, as well as your projects, from a single point of access. It enables you to maintain different versions of CLion, install updates and roll them back if needed. Toolbox remembers your JetBrains Account and uses it to automatically log in when you install and register new tools.

After the installation or upgrade, you will be prompted to import, inherit, or create new settings for the IDE.

CLion needs to be provided with C and C++ compilers and the make utility. These tools may be pre-installed on your system: check it in Preferences Build, Execution, Deployment Toolchains - the compiler and make detection should perform successfully.

If your system does not have working installations of compilers and make, the simplest solution is to install Xcode command line developer tools.

With Xcode command line tools, you get the Clang compiler installed by default. To check the compiler presence and its version, run clang --version.

Command line tools may not update automatically along with the system or Xcode update. This may cause error messages like invalid active developer path during project loading in CLion. To fix this, run the same xcode-select --install command, and the tools will be updated accordingly.

Note that you can use multiple compilers for the needs of your project, see Switching Compilers.

Now you need to configure the toolchain to work with, which means choosing the CMake executable, the make and C/C++ compilers location, and the debugger. Navigate to Preferences Build, Execution, Deployment Toolchains and edit the default toolchain, or click to add a new one.

In the CMake field, specify the CMake binary that you want to use. You may stick to the bundled CMake, or use your custom CMake executable (see the minimum supported version in Software requirements).

The chosen CMake attempts to detect the compilers and make considering the packages installed on your system. If the detection succeeds, the fields Make, C Compiler, and C++ Compiler are filled automatically:

The detection of compilers and make fails if CMake cannot locate the appropriate tools (this may happen, for instance, if you installed them separately without the Xcode developer tools). In this case, you need to provide the actual paths manually.

CLion for macOS comes with the bundled LLDB v 9.0 (the default debugger) and GDB v 8.0.1. You can also switch to a custom GDB (supported versions are 7.8.x-8.1.x). Select the debugger in Preferences Build, Execution, Deployment Toolchains:

Issues are possible when working with both bundled or custom GDB on macOS. To improve the behavior, enable the cidr.debugger.gdb.workaround.macOS.startupWithShell option in Registry (select Help Find Action from the main menu and type Registry):

A combination of GDB and Clang implies certain limitations to debugging your projects on macOS. See STL renderers for GDB on macOS for details and a workaround.

Note that enabling this option is not equivalent to setting set startup-with-shell off in your .gdbinit script.

Now that you have CLion installed and configured, you may find the following articles useful for further steps of the development:

Before setting up your toolchain preferences, make sure that all the below software packages have already been downloaded and installed.

Use this page as the reference when creating a toolchain. See also Toolchains for CMake projects.

Here you can create or delete a toolchain and modify an existing one:

Select the preferred environment from the drop down list: